Joseph of Cupertino, the patron of our province, was born in 1603 of hardy peasant stock. Uneducated and with limited intellectual abilities, Joseph desired with all his heart to become a friar. After an unsuccessful attempt to join the Capuchin Franciscans, Joseph's uncle, a Conventual Franciscan, convinced the community to give his nephew a chance. Joseph worked diligently at his studies for priesthood with little apparent academic success. However, when he faced his professors for the required examinations, he received the special grace of only being asked the few questions he could answer.

After ordination, the love that Joseph expressed for Christ's real presence in the Eucharist, and for the Blessed Virgin Mary, caused him to levitate in ecstasy. The fame of this "flying friar" quickly spread and soon he became a counselor and confessor to many humble folk and nobility.

Saint Joseph of Cupertino died at the age of 60 in 1663. He was canonized a saint in 1767 and was later named the "patron of students taking exams," and the patron saint of aviators.

Born in the Italian town of Bagnoregio in 1217, Bonaventure's life became entwined with St. Francis of Assisi when he was gravely ill as a small child. Bonaventure's mother pleaded insistently for St. Francis' intercession to save her son. Years after his miraculous recovery, Bonaventure joined the followers of Francis and became a Friar Minor.

Even before he entered the Order, Bonaventure was noted for his extraordinary intelligence and he was an eager student of the brilliant Franciscan theologian Alexander of Hales. First as a student and then as a professor, Bonaventure made a lasting contribution to the academic excellence of the University of Paris. As a spiritual master, he taught a method of contemplation that united the believer to God through the progressive stages of purgation, illumination, and union.

At the age of 36, Bonaventure was elected the Minister General of the Franciscan Order.

He was challenged with the task of re-organizing a community that had grown tremendously, and whose mission was lacking a clear focus. Over a period of seventeen years, Bonaventure instituted necessary structures and disciplines that indeed stabilized the brotherhood. At the same time, he authored several mystical treatises and Franciscan source documents that are foundational for both Franciscan spirituality and medieval theological development.

Saint Bonaventure died as a cardinal in 1274. He was canonized and declared a Doctor of the Church in 1482, the 300th anniversary of Saint Francis' birth.

After entering religious life with the Canons Regular of St. Augustine, a keen desire for martyrdom prompted Anthony to join the Friars Minor in 1221. In 1223, Saint Francis himself appointed Anthony to be the very first professor of theology for the friars. This entrustment by the founder of the community permanently placed the Franciscan Order into the heart of theological and academic development.

Beyond his illustrious academic achievements, Anthony was renowned as a popular preacher and is credited with preserving the faith of countless Christians in a time of widespread heresy. Anthony's famous sermons were accompanied by a genuine concern for the plight of the poor. He zealously fought against injustice and advocated for the needs of the helpless. Anthony's dedication to others reached a supernatural dimension through the numerous miracles attributed to his powerful intercession.

Saint Anthony of Padua died in 1231 at the age of 36 and was canonized the following year. Pope Pius XII named him a Doctor of the Church in 1946.

Born and raised in southern Italy, Francis Anthony was a pious and reserved youth who joined the Order at age 14. During the novitiate year he befriended a gregarious novice named Antonio Lucci who told him that "the fastest way to become a saint was through laughter." These two young friars remained friends and witnessed the importance of close fraternal bonds in the sanctification of self and the world.

Francis Anthony served the community as a theology and philosophy professor, a novice master, and as a minister provincial. He was also a tireless confessor and minister of compassion among prisoners and those condemned to death. Known as "Padre Maestro" among the people of Lucera, Francis Anthony was especially dedicated to his work among the poor and destitute. Likewise, his friend Antonio was called the "Father of the Poor" when he served as the Franciscan bishop of Bovino.

Saint Francis Anthony Fasani died in 1742 and was canonized in 1984. His friend Blessed Antonio Lucci died in 1752 and was beatified in 1989.

Maximilian was born in 1894 as a Pole without a nation. Two hundred years earlier Poland was divided up between Russia, Prussia, and Austria. The young son of poor weavers, Maximilian dreamed of becoming a great soldier to free his native land. But by age fourteen, this idealistic youth decided to join the Conventual Franciscans instead.

During his seminary studies in Rome, Maximilian responded to the anti-clerical attacks against the Church by forming a new spiritual movement with several of his friar classmates. They called themselves the "Knights of the Immaculata" and consecrated themselves totally to the Virgin Mary in order to lead others to the Sacred Heart of Jesus.

This Militia of the Immaculata (M.I.) movement that began in 1917 quickly grew and a few years after his ordination, Maximilian was given permission to establish a printing apostolate to expand the evangelization efforts of the M.I. Eventually this endeavor grew so large that a new friary complex was built and named the "City of the Immaculata." With over 600 friars working diligently, Maximilian's community was not only the largest religious house in the world, but it also published the most read daily newspaper in the Polish language.

With a deep love for the missionary charism of the Order, Maximilian set off for Japan with a handful of friars and set up a publishing apostolate near Nagasaki in 1930. The evangelization ministry flourished until the advent of World War II. Maximilian returned to Poland where he and his friars cared for the needs of refugees and wounded soldiers. Highly influential among his people, Maximilian was considered a dangerous threat to the Nazis. He was arrested, jailed, and finally sent to the concentration camp called Auschwitz.

There, after brutal months of forced labor, Maximilian offered his life as a martyr of charity for the life of a fellow prisoner. He was placed in a starvation bunker with 9 other men and on August 14, 1941 his life ended with a lethal injection.

Saint Maximilian Kolbe was canonized in 1982, the 800th anniversary of Saint Francis' birth, and he was declared the "patron of our difficult age."

Clare was born in 1193 to the wealthiest and most powerful family in Assisi. Yet she longed for more than earthly riches. She spent most of her youth serving the needs of others and giving food to the poor. By the age of sixteen, Clare knew that she wanted to become the bride of Christ. She shared her longing for holiness with Francis di Bernardone, who has recently given up his frivolous ways and had embraced a life of Gospel simplicity.

For two years Clare was counseled by Francis. Then, on Palm Sunday in her eighteenth year, Clare left her family home forever and joined the poor men of Assisi. Francis greeted her at the chapel of the St. Mary of the Angels and Clare consecrated herself to the Lord.

Soon other women came to join Clare in her desire to live the poverty of Christ. A community of sisters formed at the tiny sanctuary of San Damiano, where Clare remained in contemplation and service until her death in 1253 at the age of 60. The community continued to grow and many new monasteries of "Poor Clares" have been established throughout the world.

Saint Clare of Assisi was canonized two years after her death. In 1958, she was named by Pope Pius XII as the "patroness of television" in honor of a particular vision that she had one Christmas Eve.

One day when Francis went out to meditate in the fields he was passing by the church of San Damiano which was threatening to collapse because of extreme age. Inspired by the Spirit, he went inside to pray. Kneeling before an image of our crucified Lord, he was filled with great fervor and consolation as he prayed.

While his tear-filled eyes were gazing upon the Lord's cross, he heard with his bodily ears a voice coming from the cross, telling him three times: "Francis, go and repair my house, which as you can see is falling into ruin."

Conventual Franciscans of California - St. Francis of AssisiTrembling with fear, Francis was amazed at the sound of the astonishing voice, since he was alone in the church; and as he received in his heart the power of the Divine words, he fell into a state of ecstasy.

Returning finally to his senses, he prepared to put his whole heart into obeying the command he had received. He began zealously to repair the church materially, although the principal intention of the words referred to that Church which Christ purchased with His own blood, as the Holy Spirit afterward made him realize and as he later disclosed to the friars.

(Adapted from the Life of St. Francis by St. Bonaventure.) 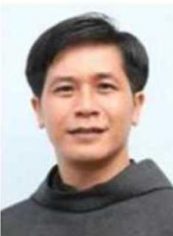