The Conventual Franciscan presence in Vietnam has its origins in the refugee crisis that followed the Fall of Saigon in April 1975. Many Catholic Vietnamese fled their native land, settling eventually in Australia, the United States, Western Europe and Japan. Starting in the 1980s, sons of these emigrant families began to enter the Order of Friars Minor Conventual in Switzerland, Japan, Poland and, especially, California and Australia.

Late in the spring of 1999, Br Anthony Phạm Đình Tuyển OFMConv, a friar of Saint Joseph of Cupertino Province in California, knowing that his cancer was terminal, returned to Nam Dinh Province to see his ancestral village and meet his extended family. In the short period of his visit to Hoang Tu, Br Anthony secured permission from local Communist authorities to rebuild the Catholic church that the Viet Minh had burned to the ground at the time of the partition of the country into North and South by the Geneva Accord of 1954. Financial support from Vietnamese Catholics in Orange County allowed him to hire a local architect and purchase the building materials for the church, which the young people of the area built themselves by volunteering their labor. Br Anthony’s rapidly deteriorating health required him to return to the United States where he died in August of 1999, before he saw the project completed. Nonetheless, ten months later, on the Feast of Saint of Saint Anthony of Padua in the year 2000, his Conventual Franciscan brothers from California and Japan converged upon this tiny hamlet in the middle of Nam Dinh’s rice paddies in order to dedicate the church that Br Anthony’s efforts had brought about.

Shortly thereafter, Fr Martin Mai Văn Sang OFMConv, a friar of Saint Maxilimilian Kolbe Custody in Australia started making frequent trips to both northern and southern provinces of the country in order explore how best to establish a stable Conventual Franciscan presence and begin the implatatio ordinis, that is, the cultivation of the Order in Vietnam. In a short time, Fr Martin began receiving requests from young men who wanted to learn more about Franciscan spirituality and were eager to experience the fraternal life of the Order. By 2004, it became clear that the Order would need to establish Franciscan formation programs. Fr Mihai Majetić OFMConv from Slovenia and Fr Maximilian Nguyễn Văn Tuấn OFMConv from California joined the mission team and Fr Tuấn, from St. Joseph of Cupertino Province in California, became the Order’s first novice master for Vietnam in 2008. Since then, the Order in Vietnam has continued to grow steadily.

As of August 2019, the Franciscan Vietnam Mission has ten priests, including three Californians: Fr Luke Vu OFMConv, the Mission Delegate; Fr Tammylee Ngo OFMConv, the Mission Procurator; and Fr James Pham OFMConv, a formator at the Southeast Asian collaborative novitiate in Tagaytay. There are more than twenty local friars in solemn vows, two fo whom are deacons awaiting ordination to the priesthood. One of them, Friar Nhuong, was one of the local children present at the June 2000 dedication of the church in Hoang Tu Village. About two dozen simply professed friars in Vietnam are pursue studies for the priesthood. This year, three of our twenty-three postulants received the habit and became Franciscan novices in the Philippines. The remaining postulants will continue their pre-novitiate formation, which includes learning English. In the send half of 2019, the Franciscan Vietnam Mission will celebrate another round of professions of solemn vows, and of diaconal and presbyteral ordinations.

The apostolic life of the friars in Vietnam focuses principally on the corporal works of mercy. In the Red River Delta area in the north, the friars minister both to the rural poor of Thai Binh Province and especially to elderly leprosy patients in Văn Môn Village. In the south, the friars have created the Bread of Saint Anthony program which assists poor families — often headed by single mothers — with basic necessities: food, clothing and school supplies for the children. On weekends, the Conventual Franciscan student friars who study philosophy and theology at either the Franciscan Institute of Saigon or the Centrum Dominicanum Studiorum bring meals to the sick in Thủ Đức Hospital in the metro-Saigon megalopolis.

Enjoy a Slide Show of Pictures from our Franciscan Vietnam Mission Below!

Would you Consider Sharing in our Missionary Work in Vietnam? Please consider a Donation with button on the right! Thank You! 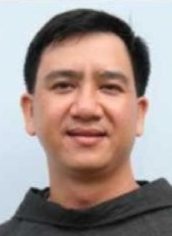